Sketch of the Day: Peter Falk Director William Friedkin said of Falk's role in his film The Brink's Job (1978): "Peter has a great range from comedy to drama. He could break your heart or he could make you laugh."[2] In 1996, TV Guide ranked Falk No. 21 on its 50 Greatest TV Stars of All Time list.[3] He received posthumously a star on the Hollywood Walk of Fame in 2013.

Source: Wikipedia
Posted by Sketch of the Day at 11:44 AM No comments:

Sketch of the Day: Nelson Mandela 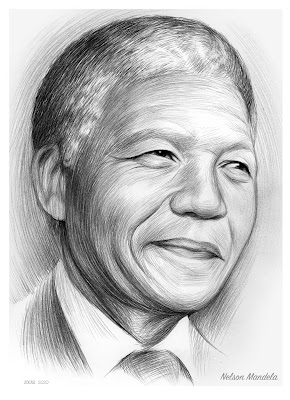 Nelson Rolihlahla Mandela(18 July 1918 – 5 December 2013) was a South African anti-apartheid revolutionary, political leader and philanthropist who served as President of South Africa from 1994 to 1999. He was the country's first black head of state and the first elected in a fully representative democratic election. His government focused on dismantling the legacy of apartheid by tackling institutionalised racism and fostering racial reconciliation. Ideologically an African nationalist and socialist, he served as the president of the African National Congress (ANC) party from 1991 to 1997. Source: Wikipedia

Posted by Sketch of the Day at 5:32 PM No comments: 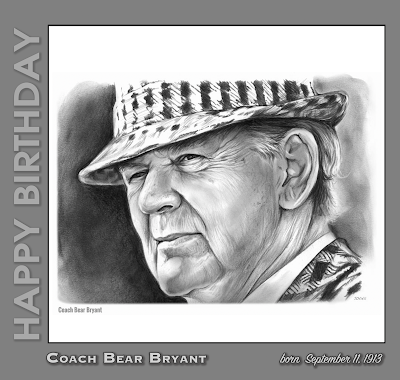 #HappyBirthday If you were born on this day, "September 11th" you share a birth day with legendary football coach #BearBryant, who was born on September 11, 1913.

Posted by Sketch of the Day at 8:12 AM No comments: 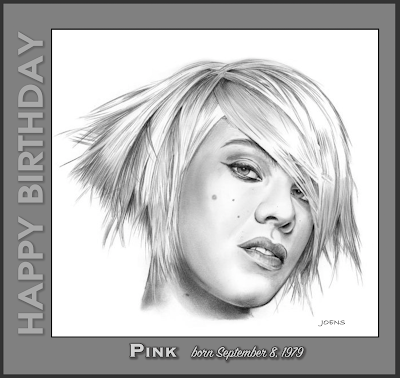 Alecia Beth Moore (born September 8, 1979), known professionally as Pink (stylized as P!nk), is an American singer, songwriter, dancer, actress, record producer, spokesperson, and model. She was originally a member of the girl group Choice. In 1995, LaFace Records saw potential in P!nk and offered her a solo recording contract. Her R&B-influenced debut studio album Can't Take Me Home (2000) was certified double-platinum in the United States and spawned two Billboard Hot 100 top-ten songs: "There You Go" and "Most Girls". She gained further recognition with the collaborative single "Lady Marmalade" from the Moulin Rouge! soundtrack, which topped many charts worldwide. Refocusing her sound to pop rock with her second studio album Missundaztood (2001), the album sold more than 13 million copies worldwide and yielded the international number-one songs "Get the Party Started", "Don't Let Me Get Me", and "Just Like a Pill".

While P!nk's third studio album, Try This (2003), sold fewer copies than her previous work, it earned her the Grammy Award for Best Female Rock Vocal Performance for the single "Trouble". She returned to the top of record charts with her fourth and fifth studio albums, I'm Not Dead (2006) and Funhouse (2008), which generated the top-ten entries "Who Knew" and "U + Ur Hand", as well as the number-one single "So What". Pink's sixth studio album, The Truth About Love (2012), was her first album to debut atop the Billboard 200 chart and spawned her fourth number-one single, "Just Give Me a Reason". In 2014, Pink recorded a collaborative album, Rose Ave., with Canadian musician Dallas Green under a folk music duo named You+Me. Her seventh studio album, Beautiful Trauma (2017), became the third best-selling album of the year and saw the success of its lead single, "What About Us".

Recognized for her distinctive, raspy voice and acrobatic stage presence,[1][2] As of 2020, Pink has sold 150 million records worldwide, making her one of the world's best-selling music artists.[3] Her career accolades include three Grammy Awards, two Brit Awards, a Daytime Emmy Award and seven MTV Video Music Awards, including the Michael Jackson Video Vanguard Award. In 2009, Billboard named Pink the Pop Songs Artist of the Decade. Pink was also the second most-played female solo artist in the United Kingdom during the 2000s decade, behind only Madonna. VH1 ranked her number 10 on their list of the 100 Greatest Women in Music, while Billboard awarded her the Woman of the Year award in 2013. At the 63rd annual BMI Pop Awards, she received the BMI President's Award for "her outstanding achievement in songwriting and global impact on pop culture and the entertainment industry."[4]

Posted by Sketch of the Day at 9:15 AM No comments: 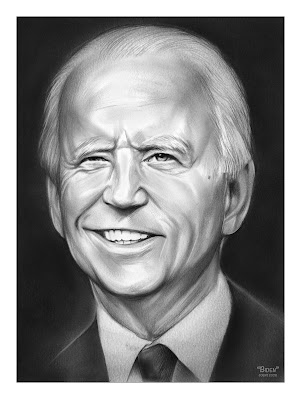 
Pencil drawing of Democratic presidential candidate Joe Biden.Joseph Robinette Biden Jr. (/ˌrɒbɪˈnɛt ˈbaɪdən/;[1] born November 20, 1942) is an American politician who served as the 47th vice president of the United States from 2009 to 2017. He served as a United States Senator for Delaware from 1973 to 2009. A member of the Democratic Party, Biden is the Democratic presidential nominee for the 2020 election, running against the incumbent, Donald Trump.[2] Biden unsuccessfully sought the Democratic presidential nomination in 1988 and 2008, and secured his first in 2020.Biden was raised in Scranton, Pennsylvania, and New Castle County, Delaware. He studied at the University of Delaware before receiving his law degree from Syracuse University.[3] He became a lawyer in 1969 and was elected to the New Castle County Council in 1970. He was elected to the U.S. Senate from Delaware in 1972, becoming the sixth-youngest senator in American history. Biden was a longtime member and eventually chairman of the Senate Foreign Relations Committee. He opposed the Gulf War in 1991 but supported the expansion of the NATO alliance into Eastern Europe and its intervention in the Yugoslav Wars of the 1990s. He supported the resolution authorizing the Iraq War in 2002 but opposed the surge of U.S. troops in 2007. He also served as chairman of the Senate Judiciary Committee from 1987 to 1995, dealing with issues related to drug policy, crime prevention, and civil liberties. Biden led the efforts to pass the Violent Crime Control and Law Enforcement Act and the Violence Against Women Act, and oversaw the contentious U.S. Supreme Court nominations of Robert Bork and Clarence Thomas.Biden was reelected six times to the U.S. Senate and was the fourth-most senior senator when he resigned after winning the vice presidency alongside Barack Obama in the 2008 presidential election.[4] Obama and Biden were reelected in 2012. As Vice President, Biden oversaw infrastructure spending in 2009 to counteract the Great Recession. His negotiations with congressional Republicans helped the Obama administration pass legislation including the 2010 Tax Relief Act, which resolved a taxation deadlock; the Budget Control Act of 2011, which resolved a debt ceiling crisis; and the American Taxpayer Relief Act of 2012, which addressed the impending fiscal cliff. In foreign policy, Biden led the efforts to pass the United States–Russia New START treaty; supported military intervention in Libya, and helped formulate U.S. policy toward Iraq through the withdrawal of U.S. troops in 2011. Following the Sandy Hook Elementary School shooting, Biden led the Gun Violence Task Force, created to address the causes of gun violence in the United States.[5]In October 2015, Biden announced that he would not seek the presidency in the 2016 election. In January 2017, Obama awarded Biden the Presidential Medal of Freedom with distinction.[6] Biden announced his 2020 candidacy for president on April 25, 2019, and in June 2020, he met the 1,991-delegate threshold needed to secure the Democratic Party's nomination. On August 11, 2020, Biden announced U.S. Senator Kamala Harris as his running mate in the 2020 presidential election.Source: Wikipedia
Posted by Sketch of the Day at 4:55 PM No comments: 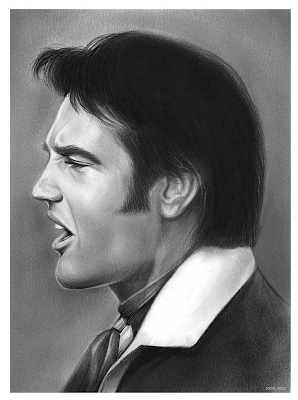 Elvis Aaron Presley[a] (January 8, 1935 – August 16, 1977), also known simply as Elvis, was an American singer, musician and actor. He is regarded as one of the most significant cultural icons of the 20th century and is often referred to as the "King of Rock and Roll" or simply "the King". His energized interpretations of songs and sexually provocative performance style, combined with a singularly potent mix of influences across color lines during a transformative era in race relations, led him to great success—and initial controversy.Presley was born in Tupelo, Mississippi, and relocated to Memphis, Tennessee, with his family when he was 13 years old. His music career began there in 1954, recording at Sun Records with producer Sam Phillips, who wanted to bring the sound of African-American music to a wider audience. Presley, on rhythm acoustic guitar, and accompanied by lead guitarist Scotty Moore and bassist Bill Black, was a pioneer of rockabilly, an uptempo, backbeat-driven fusion of country music and rhythm and blues. In 1955, drummer D. J. Fontana joined to complete the lineup of Presley's classic quartet and RCA Victor acquired his contract in a deal arranged by Colonel Tom Parker, who would manage him for more than two decades. Presley's first RCA single, "Heartbreak Hotel", was released in January 1956 and became a number-one hit in the United States. With a series of successful network television appearances and chart-topping records, he became the leading figure of the newly popular sound of rock and roll.In November 1956, Presley made his film debut in Love Me Tender. Drafted into military service in 1958, Presley relaunched his recording career two years later with some of his most commercially successful work. He held few concerts, however, and guided by Parker, proceeded to devote much of the 1960s to making Hollywood films and soundtrack albums, most of them critically derided. In 1968, following a seven-year break from live performances, he returned to the stage in the acclaimed television comeback special Elvis, which led to an extended Las Vegas concert residency and a string of highly profitable tours. In 1973, Presley gave the first concert by a solo artist to be broadcast around the world, Aloha from Hawaii. Years of prescription drug abuse severely compromised his health, and he died suddenly in 1977 at his Graceland estate at the age of 42.With his rise from poverty to significant fame, Presley's success seemed to epitomize the American Dream. He is the best-selling solo music artist of all time, and was commercially successful in many genres, including pop, country, R&B, adult contemporary, and gospel. He won three Grammy Awards, received the Grammy Lifetime Achievement Award at age 36, and has been inducted into multiple music halls of fame. Presley holds several records; the most RIAA certified gold and platinum albums, the most albums charted on the Billboard 200, and the most number-one albums and number-one singles on the UK Albums Chart and UK Singles Chart, respectively. In 2018, Presley was posthumously awarded the Presidential Medal of Freedom. Source: Wikipedia

Posted by Sketch of the Day at 9:43 AM No comments:

Isaac Sidney Caesar (September 8, 1922 – February 12, 2014) was an American comic actor and writer, best known for two pioneering 1950s live television series: Your Show of Shows, which was a 90-minute weekly show watched by 60 million people, and its successor, Caesar's Hour, both of which influenced later generations of comedians.[1] Your Show of Shows and its cast received seven Emmy nominations between the years 1953 and 1954 and tallied two wins. He also acted in movies; he played Coach Calhoun in Grease (1978) and its sequel Grease 2 (1982) and appeared in the films It's a Mad, Mad, Mad, Mad World (1963), Silent Movie (1976), History of the World, Part I (1981), Cannonball Run II (1984), and Vegas Vacation (1997).Caesar was considered a "sketch comic" and actor, as opposed to a stand-up comedian. He also relied more on body language, accents, and facial contortions than simply dialogue. Unlike the slapstick comedy which was standard on TV, his style was considered "avant garde" in the 1950s. He conjured up ideas and scene and used writers to flesh out the concept and create the dialogue. Among the writers who wrote for Caesar early in their careers were Mel Brooks, Neil Simon, Larry Gelbart, Carl Reiner, Michael Stewart, Mel Tolkin, Selma Diamond, and Woody Allen. "Sid's was the show to which all comedy writers aspired. It was the place to be," said Steve Allen.His TV shows' subjects included satires of real life events and people—and parodies of popular film genres, theater, television shows, and opera. But unlike other comedy shows at the time, the dialogue was considered sharper, funnier, and more adult-oriented. He was "...best known as one of the most intelligent and provocative innovators of television comedy," who some critics called television's Charlie Chaplin and The New York Times refers to as the "...comedian of comedians from TV's early days."[2]Honored in numerous ways over 60 years, he was nominated for 11 Emmy Awards, winning twice. He was also a saxophonist and author of several books, including two autobiographies in which he described his career and later struggle to overcome years of alcoholism and addiction to barbiturates. Source: Wikipedia

Sketch of the Day

Sketch of the Day